Here’s a heartwarming story about a woman who rescues an orphaned deer…but it may not have a happy ending. Although that can change, and it may. Here’s the complete story as I read it on the Dodo’s September 26th newsletter:

“A woman dedicated two years of her life to saving an orphaned deer — and now she’s trying to stop the state from killing him.

Back in 2013, Jodi Proger was driving down the highway when someone a few cars in front of her crashed into a mother deer. The deer died, and her days-old fawn was circling her body in a panic. 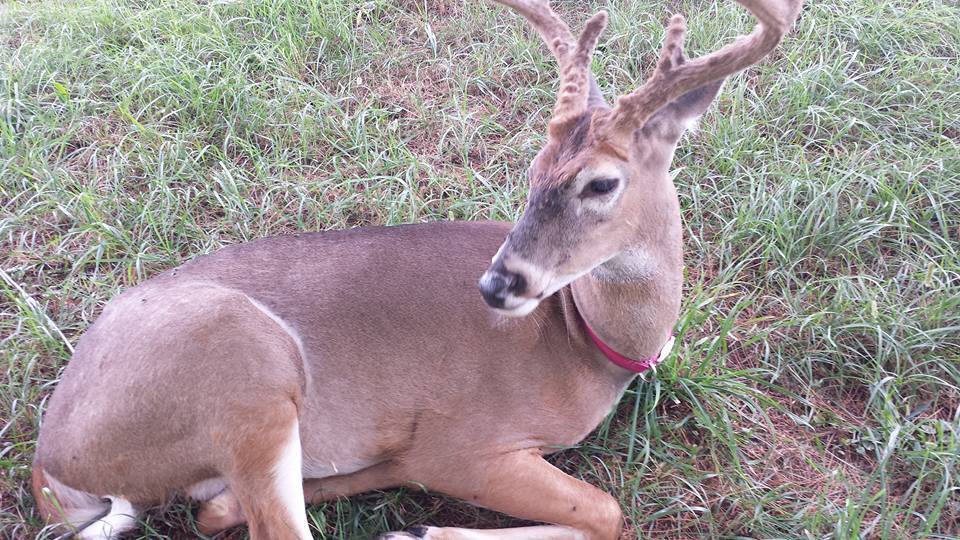 Proger kept driving, but a few yards down the road she glanced in her rearview mirror. The little fawn was still running around in terror, nearly getting hit by other cars. Proger knew what she had to do.

“I wasn’t gonna do it but I did it,” she said. And so she ran back, scooped the frightened little deer up, and took him home with her.

Proger, who lives on a 5-acre farm with her husband and horses, said there aren’t any deer sanctuaries in Ohio, so she knew she was his only chance. She raised the little fawn, whom she named Wheezer, on her own, feeding him every few hours for the first months of his life. 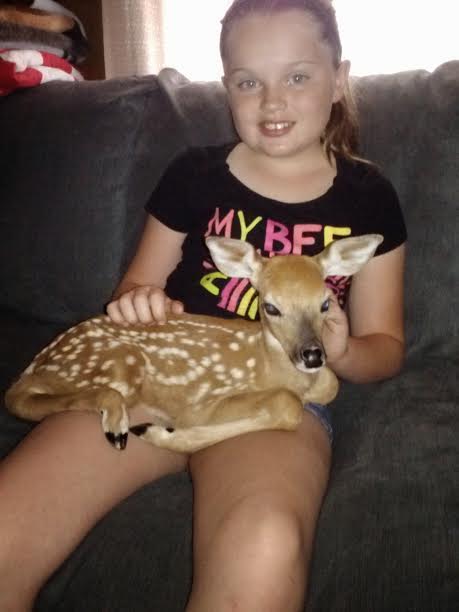 The pair quickly bonded, and ever since, Wheezer has been a part of Proger’s family. The 2-year-old deer is housebroken, so he can go in and out of the house as he pleases. He prefers to spend the day outside in the yard; he’s on a 100-foot dog tether when he’s not supervised, but Proger and her husband hope to complete a new enclosure for him next week.

He likes to sleep indoors with the family, so around 10 p.m. every night he comes inside to get ready for bed. “He’ll climb up on the loveseat and he’ll watch a little TV and he’ll crash on the loveseat,” Proger said. 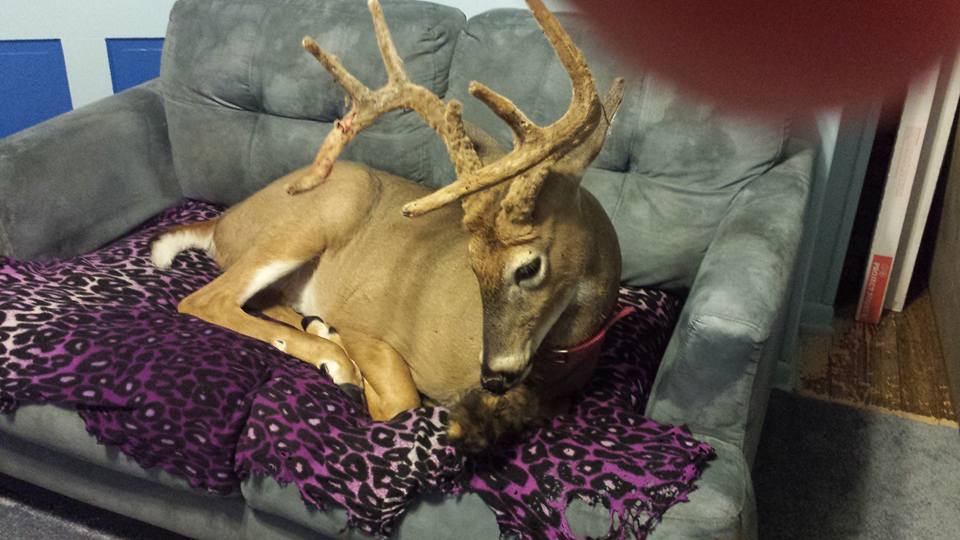 He’s also smart. Wheezer usually has to go to the bathroom in the middle of the night, so he wakes Proger up around 3 a.m. so she can open the door for him. Afterwards, she gives him a bit of banana and milk as a nighttime snack and then he climbs back on his loveseat to sleep until morning.

And Wheezer has bonded with the other family members as well. “Him and the dog will lie on the floor with each other,” Proger said. “He loves the cats — he licks them to death.”

“We’ve had him a little over two years with no problems, no complaints from any of our neighbors, nothing,” she added. 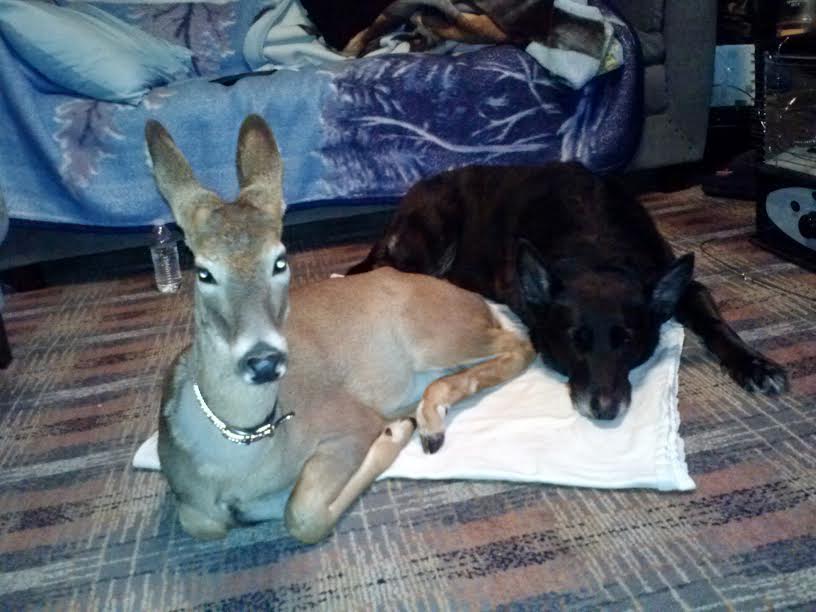 All that changed a month ago. Wheezer was out roaming the yard when he saw an officer who was supervising a group of prisoners as they cleaned up the highway. Wheezer, who doesn’t like anything new in his environment, was standing at the end of his tether staring down the man. The man was staring back. Proger had an inkling that something was wrong.

Sure enough, officials with the Ohio Department of Natural Resources (ODNR) showed up shortly after to tell Proger that she was violating the law by keeping Wheezer.

Their solution? Killing him. 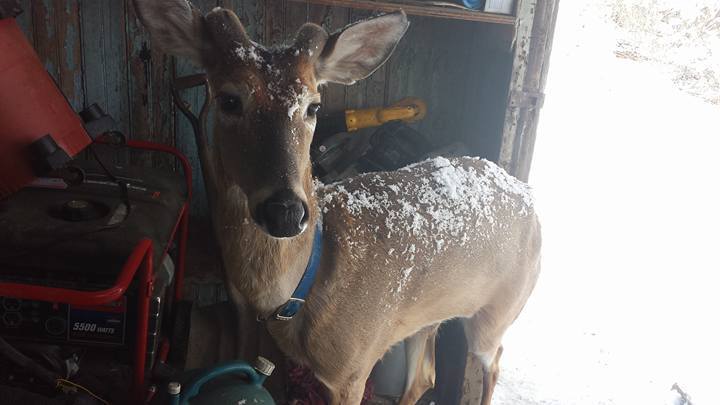 Proger begged them to return to the office and pretend they saw nothing, but they refused. However, they left after an hour without taking the deer. 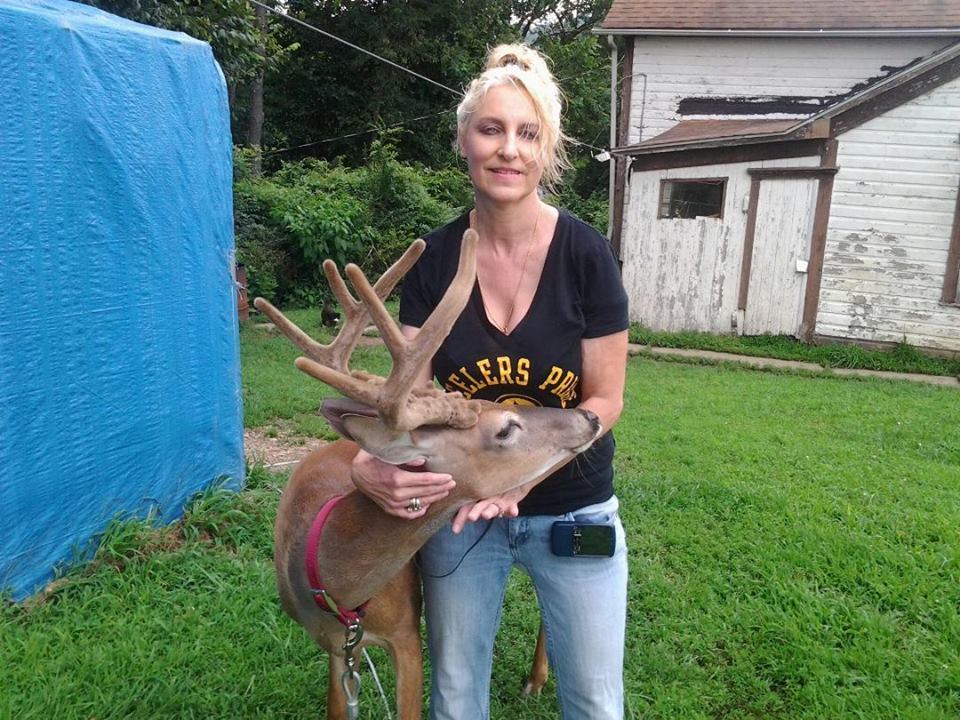 Like most states, Ohio has laws protecting wildlife, and it’s illegal to keep a wild deer as a pet. But the absence of sanctuaries, or compassionate wildlife resources, means people like Proger can be stuck between a rock and a hard place.

“Ohio has no sanctuaries whatsoever,” Proger said about the state’s handling of wildlife. “Their only thing is to come in, take them and kill them.” 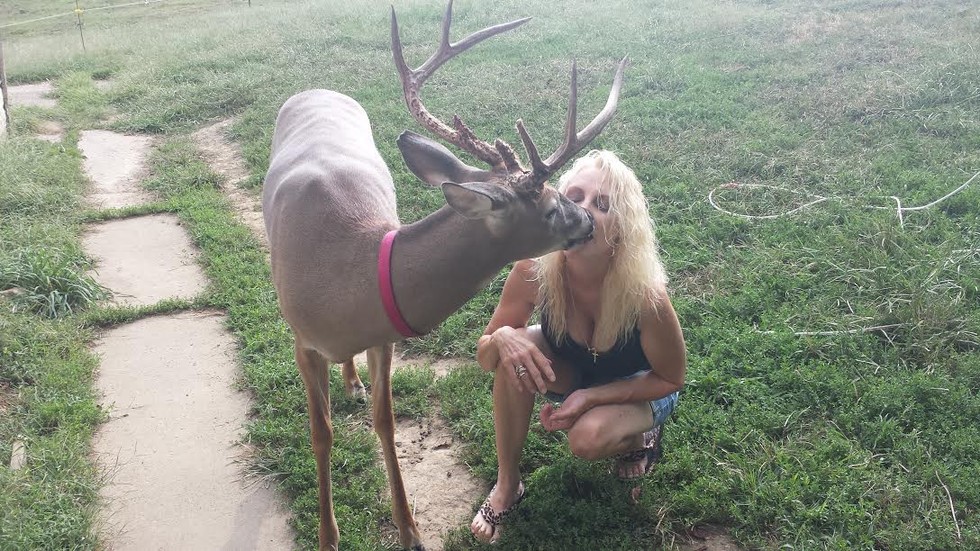 Though it’s not ideal for a deer to live in a domestic situation, Proger knows that she was — and is — the little fawn’s only chance at survival.

She reached out to Ohio state senator Lou Gentile (D-30), who helped stall the ODNR. “He got the kill order off of Wheezer’s head, but they’re still debating what to do with me and Wheezer,” she said. 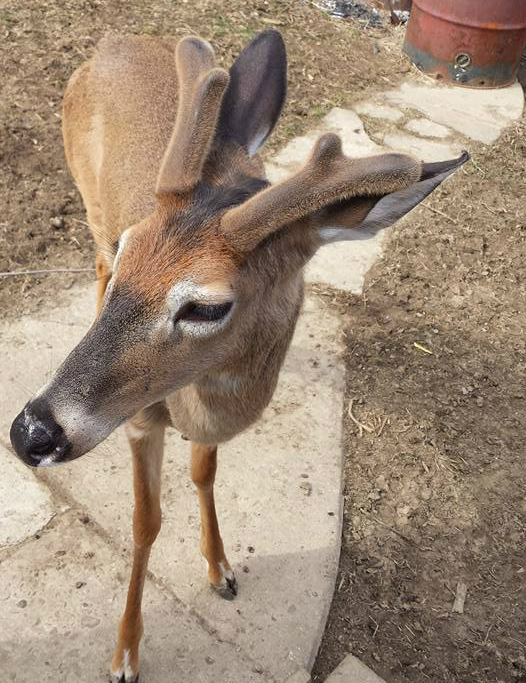 Proger hopes to get an exemption that would allow her to provide a home for Wheezer since no others are available, and she’s hoping the state will take the circumstances of his rescue into account. There have been at least two similar situations in recent years where exemptions have been granted.

“I am just so amazed and so much in awe of the support I have received,” Proger said. “I am so, so grateful.” 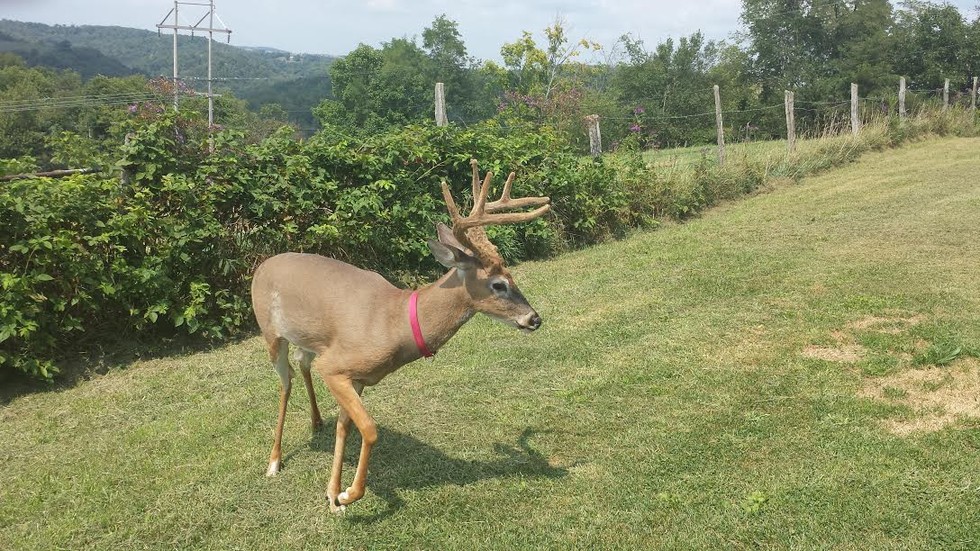 But for now, she’s just focused on caring for Wheezer — like she has been since he was first orphaned two years ago.

If you’d like to help, you can sign an Ohio SPCA petition asking Ohio Gov. John Kasich and other state officials to spare Wheezer’s life. You can also contact the governor’s office here.”

What a story it is!! I hope the committee that is working on this issue will grant Jodi Proger an exemption. I did sign the petition. Please do too if you are so inclined. At least that might spare his life.

He seems to be thriving in this homey situation, don’t you think? It’s not ideal for a wild animal–and I definitely don’t like the idea of the tether– after all, he should be able to run and jump. But it’s all this deer knows at this point. And he seems quite happy! Maybe they can find a deer sanctuary in another state that will take him since Ohio doesn’t have one. That would probably be ideal. Although I must say, he certainly seems to have a good life right now…

What do you think?

This is very exciting news! Remote cameras in Yosemite National Park have recently captured images of a Sierra Nevada Red Fox (once in December and the most recent one this month). This is the first sighting of the very shy Red Fox in one hundred years!! This is a very endangered species – one of the most endangered mammals in North America in fact – and biologists and researchers claim there are less than 50 individual Sierra Nevada Red Foxes (also known as the High Sierra Fox) left in the wild. Considered to be “critically endangered,” the Center for Biological Diversity petitioned the federal government to protect the High Sierra fox under the Endangered Species Act.

Here’s a video clip of the image caught on camera with an audio announcement about the sighting:

What a gorgeous animal!

The All About Wildlife website is an educational resource and has a good list of ways to help wildlife and I encourage you to go take a look at what they suggest. There you’ll be able to discover how to plant a wildlife garden and you’ll also have access to a list of top wildlife and environmental non-profit organizations.

Thanks for taking the time to read my blog post. Feel free to share your thoughts in the comments section. Have you ever spotted a rare or endangered animal? Can you imagine how exciting it was when the reviewers of the camera footage saw that Sierra Nevada Red Fox?!

This is an amazing story about two adult elk who keep a young boy warm, enabling him to survive the night in freezing temperatures. I was just thinking about how these elk were angels when the woman in the video said the same thing!

Always believe, no matter what your situation!

A startling whoosh of the magnificent hawk as it takes flight, its powerful wings flapping strong and steady, ascending, until a gentle gust pulls it up, and with wingspan fully extended it gracefully glides across the sky, scanning the landscape.

Suddenly, I’m keenly aware of dozens of birds around me: a cardinal couple engaged in a mating dance on the branches of the bare crape myrtle; a blue jay silently watching from its perch on a neighboring tree; mourning doves poking around in the grass, picking up scraps of seeds that others have cast out of the feeder; and tiny sparrows flitting in and out of the bush at the edge of the flower bed.

How often I take for granted these amazing creatures who every day put on a most awe-inspiring show of natural performance. Taking a few moments to ground myself, I take a front row seat to the spendor that lie before me. Watching. Still. Surprisingly peaceful. Fulfilled. And wondering. What would it be like to be a bird? I know I have often wondered that in times past but haven’t thought about it much lately.

What would it be like to be so free? So unencumbered, shifting direction with effortless maneuverability and graceful movement. I wonder if my world view would change if I had a birds-eye view. No mortgage to fret about, no relationships weighing heavy on my heart, no baggage from the past, no worry about tomorrow, no politics to scream about, no fear of our world’s future. Oh, how I could love being a bird!

“The reason birds can fly and we can’t is simply because they have perfect faith, for to have faith is to have wings.”
― J.M. Barrie, The Little White Bird