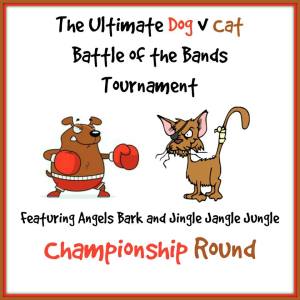 This is the battle we’ve all been waiting for. To recap: My friend Mary (from Jingle Jangle Jungle) and I teamed up on putting together this fun Dog v Cat Battle of the Bands Tournament. It’s been so much fun and hopefully you’ve had a chance to check it out. But if not, no worries! You can still play in this very exciting AND HISTORICAL event!

After weeks of battles choosing best Dog songs and best Cat songs in the categories of Hard and Soft Rock, we had Playoffs to determine which song was going to Represent going into the Championship Battle. And now we are here with the exciting finish.

Here voters had an opportunity to vote for either the hard-rock Led Zeppelin’s “Black Dog” or the soulful soft pop by Marvin Gaye, “I’ll Be Doggone”.

It was a super tight race and tied all the way up to the very end, when two votes came in, pushing Led Zeppelin over the finish line. The final playoff tally was 8-6. (FYI: I voted for Marvin Gaye’s song). So the NDC (National Dog Conference) is sending hard rock winner “BLACK DOG” to today’s big Battle Championship!

So just what Cat song is our Dog champ going up against? Mary’s NCC (National Cat Conference) Playoff winner is the beloved “CATS IN THE CRADLE” by Harry Chapin. 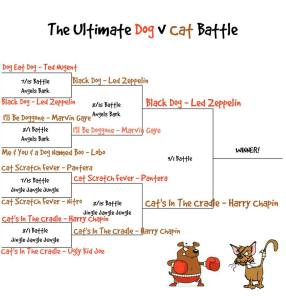 SO THIS IS IT! It’s time for the knock-down drag-out battle between CANINE and FELINE. Who will be the reigning victor of the first ever DOG v CAT BATTLE OF THE BANDS TOURNAMENT CHAMPIONSHIP??

It’s in your hands People! Are you a dog person or a cat person? LET’S HEAR FROM YOU!!!

CATS IN THE CRADLE by Harry Chapin

PLACE YOUR VOTES IN THE COMMENTS SECTION BELOW. Being this is the Championship, both Mary and I have the same exact battles going today, using the exact same videos. We know that the regular BOTBers will be placing duplicate votes. Don’t worry about it; we’re going to take out the duplicates. PLEASE VOTE WHEN YOU VISIT EACH OF US. Thank you so much! Thanks for playing along…

VOTING WILL BE OPEN THROUGH SEPTEMBER 10th!

And Don’t Forget to visit the other Battles today. First go to Mary’s Jingle Jangle Jungle Dog v Cat Championship battle post and place your vote there. There are links to all participants at BOTB Host Stephen McCarthy.

For your convenience, I’ve also listed the other cool battles going on with our fun group so be sure to visit and vote on all these battles:

The Sound of One Hand Typing 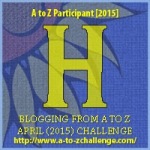 DISCLAIMER THAT APPEARS AT THE BEGINNING OF ALL A-Z 2015 PAGES:

Welcome to the A-Z Musical Tour of My Life! I have wanted to put something like this together for a long time now and the A-Z Challenge just seemed like the perfect opportunity. I’ve compiled stories, trivia, research, music videos and live concert footage on all the bands and musical artists who have been important to me over the years, especially during my youthful years in the 60s and 70s. At first glance, the posts may seem long – and some of them are due to the number of videos included – but it’s really laid out in a way that will enable you to scroll through and read, see or hear just what you want and then either move on to the next A-Zer or linger and listen to the great music that you’ll find here. By all means, bookmark my blog so you can come back! In addition to individual songs, there are some full albums here for those who may want to enjoy some music while they’re surfing or working. I hope you find that the stories are entertaining, the information educational and the trivia interesting. It would be a tremendous honor if you would bookmark the A-Z Musical Tour of My Life as a resource for great music and music information! Now, let’s get started with…

H is for Humble Pie – I always liked that name! A band from England formed in 1969, Humble Pie was one of the first 60’s supergroups. (a supergroup is a music group whose members are already successful as solo artists or as part of other groups. In some cases, an act will later be referred to as a supergroup when multiple members from said group end up securing individual fame later on). Humble Pie’s original band lineup were all members from other groups; and as the most notable member, Peter Frampton went on to find success in a solo career.

They are most known for their hits Thirty Days in the Hole and I Don’t Need No Doctor.

Thirty Days in the Hole from their 1972 album “Smokin”

H is for Head East – an American rock band most known for its single Never Been Any Reason.

Never Been Any Reason from their 1974 “Flat as a Pancake” album:

They recorded Since You’ve Been Gone in 1978 but it only achieved nominal success, reaching #46 on the charts.

H is for the Hollies – one of the few British pop groups of the early 1960s that have never officially broken up and continue to record and perform. In recognition of their achievements, the Hollies were inducted to the Rock and Roll Hall of Fame in 2010. My favorite Hollies song that always gets me up and dancing is their 1972 single Long Cool Woman in a Black Dress:

Probably my first taste of the Hollies was with their 1974 release The Air That I Breathe:

Another Hollies song that evokes emotion in me to this day is the hauntingly beautiful He Ain’t Heavy, He’s My Brother from 1969. The origin of the title is this: In 1884, James Wells, Moderator of the United Free Church of Scotland, in his book The Parables of Jesus tells the story of a little girl carrying a big baby boy. Seeing her struggling, someone asked if she wasn’t tired. With surprise she replied, “No, he’s not heavy; he’s my brother.”

To me, it has a different significance: My brother and I used to be inseparable. We hung out and partied like crazy in the 70s and early 80s. We used to frequent this little neighborhood beer joint called Tanks Tavern. They had a great jukebox there and I used to drop a lot of money every night to hear and dance to my favorite songs. Among the songs that sprang forth from my quarters was He Ain’t Heavy, He’s My Brother. And whenever the song came on, my brother and I would find each other in the bar and share a glance, a smile and a raise of our drinks as he knew I played that song as a tribute to him. I love my brother! We were so tight back in the day. And every time I hear that song today, I get a little tear in my eye because it’s so meaningful to me.

H is for Harry Nilsson – (June 15, 1941 — January 15, 1994) An American singer-songwriter who saw the peak of his success in the early 70s. He is best known for three hit singles featured here: Without You, Coconut and Everybody’s Talkin’. Interestingly, “he was one of the few major pop-rock recording artists of his era to achieve significant commercial success without ever performing major public concerts or undertaking regular tours.

He was awarded Grammys for two of his recordings; best male contemporary vocal in 1969 for ‘Everybody’s Talkin’’, a prominent song in the Academy Award-winning movie Midnight Cowboy, and best male pop vocal in 1972 for ‘Without You.’” (Wikipedia)

Coconut  – very funny music video from 1971 for this very popular and iconic hit:

H is for Heart – The Dynamic Sisterly Duo! Heart is a powerhouse band with sisters Nancy Wilson (guitarist) and Ann Wilson (lead singer) at the center.  They debuted the “Dreamboat Annie” album in 1976 and started their rise to fame in the mid-70s with two hit singles, Crazy On You and Magic Man. 1977 saw the release of the “Little Queen” album with hit singles Barracuda and Kick It Out, as well as the title track Little Queen, becoming their second million seller. Then in 1978, their album “Dog and Butterfly” reached double-platinum status with the title song and Straight On. This is one seriously rockin’ band! I’m posting each one of these singles because you deserve to rock out right now…

Crazy On You – this is their 1977 performance on the Midnight Special:

Dog and Butterfly  Recorded in Seattle, during the last show of their 2002 Summer Of Love Tour

H is for Harry Chapin – an American singer songwriter, best known for his relatable folk-rock style with songs like Taxi, Flowers are Red, W.O.L.D. and the number one hit song Cat’s in the Cradle. Chapin was also a dedicated humanitarian who tragically died in a car accident at the age of 38, when he was at the height of his career. He was posthumously awarded the Congressional Gold Medal for his humanitarian work in 1987.

With his fantastic story-telling ability, this is the song that is said to have changed, repaired and revitalized relationships between fathers and sons. Here’s Harry Chapin performing Cat’s in the Cradle, with an introduction by his widow Sandy Chapin and his son Josh Chapin:

H is for Helen Reddy – Any girl coming up in the 70s was likely ushered by anthems of the Women’s Liberation Movement, the loudest and boldest of which was Helen Reddy’s I Am Woman. Empowering women, this song was proudly belted out by women around the world. In fact, the United Nations declared 1975 to be International Women’s Year and they chose this song as their theme!

Here is Helen Reddy performing this song, her first Number One hit, in 1973 on the Midnight Special:

And finally, You and Me Against the World. I have no idea when this aired but I do remember seeing Helen Reddy singing this song to Kermit the Frog. I don’t know what I thought of it back then but today it made me smile. So cute!

Which of the songs in this post do you like the best? Who are your favorite H bands? Who did I forget??