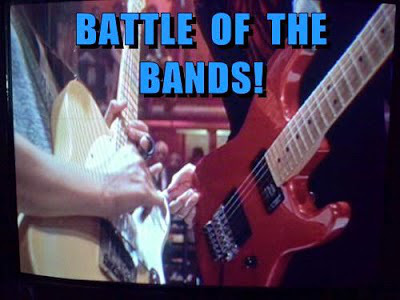 It’s RESULTS time for my latest Battle of the Bands, featuring Riot and All About Eve battling with Cliff Richard’s hit Devil Woman.  It was my first battle back after a break and I feared a shutout as all votes coming in were going to Riot.

But then Stephen whisked in and shut that shutout down! In the end, All About Eve picked up a few more votes, including mine, but certainly not enough for the win.

I actually liked both versions. When I first heard the versions, I said Nah to each one. But then as the song went on, Riot’s version grew on me and then so did All About Eve’s. I kinda like them both equally. In the end I decided my choice by imagining which one I’d rather listen to on auto-repeat and it came down to All About Eve’s version.

As always, thanks for participating! I’ll be back with a new battle on June 1st…

I’ll leave you with another song by All About Eve: Wild Hearted Woman

Devil Woman is a 1976 hit single by Cliff Richard from his album I’m Nearly Famous.

In case you’re not familiar with Cliff Richard: Sir Cliff Richard OBE (born Harry Rodger Webb, October 14, 1940) is a British pop singer, musician, performer, actor and philanthropist. Richard has sold more than 250 million records worldwide. He has total sales of over 21 million singles in the United Kingdom and is the third-top-selling artist in UK Singles Chart history, behind the Beatles and Elvis Presley.

“Devil Woman” was written by Terry Britten and Christine Holmes (singer of the Family Dogg) and also recorded by Holmes under the name “Kristine”.

A No. 9 UK hit in June 1976, “Devil Woman” became Richard’s first single to reach the Top 20 in the US, reaching No. 6 on the Billboard Hot 100, which was Richard’s highest peaking single. “Devil Woman” is the third biggest-selling Cliff Richard single with over two million copies sold worldwide. It was certified Gold by the RIAA in the US and the CRIA in Canada.

The song is told from the point of a view of a man jinxed from an encounter with a stray cat with evil eyes, and his discovery that the psychic medium (a Gypsy woman) whose help he sought to break the curse was the one responsible for the curse in the first place.

The song is heavily guitar-driven, with soft-distortion lines doubling the melody in the chorus and long, high, sustained single notes providing atmosphere over the verses. A Rhodes electric piano, bass guitar, drums and percussion are the only other instruments.

Here’s is Cliff Richard’s hit. Give a listen and be sure to Crank It Up! It absolutely should be listened to at high volume…and you’ll surely see why it’s one of my favorites. Such a great song. (But don’t vote for this version; it’s only here for your enjoyment. Vote on the covers presented below).

Riot is an American heavy metal band founded in New York City in 1975 by guitarist Mark Reale. Reaching a peak in popularity in the early 80s, the band has continued a long-running successful career.

Riot’s sound initially started out as straightforward heavy metal, but since their 1988 release Thundersteel their musical direction has been more along the lines of power metal.

In 2013, Riot V, a new iteration of the band, was launched by the surviving members, post the passing of founding member and band leader Mark Reale.

Their cover of Devil Woman appeared on Riot’s 1983 album Born in America:

All About Eve was an English band known for their alternative and gothic rock style. The band’s name was taken from the 1950 film starring Bette Davis. The initial creative core consisted of Julianne Regan (vocals) and Tim Bricheno ( guitar) and Andy Cousin (bass guitar) with other members changing over the years. Their biggest commercial success was “Martha’s Harbour” (1988), although the band’s tenure ran between 1984 and 2004, and included four UK Top 50 albums. The band have been recognized for their “unique, folk-rock-influenced take” on the gothic rock style and Regan has been described as “certainly one of the more talented singers” of the scene in the late 1980s.

All About Eve did the Devil Woman cover as a B-side of their 12″ single Flowers in Our Hair in 1987.

TIME TO VOTE! Which version do you like better and why? When you’re done voting, please visit these other BOTB participants and check out their cool battles:

I’ll be back on the 21st with results for this battle. Thanks for participating!