In Loving Memory of Harry

Ah, my sweet boy Harry. What a dog he was! He was definitely my Mischief Maker. 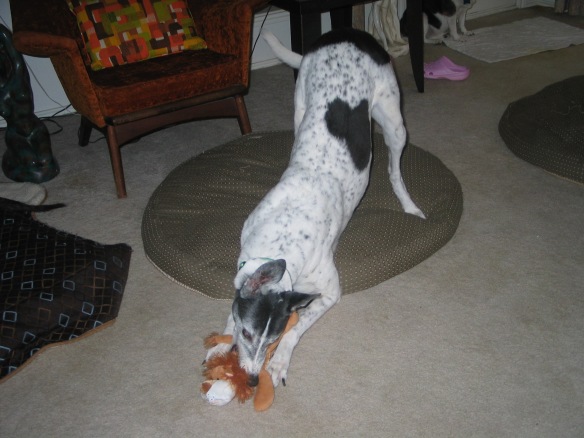 Most people knew him as “Crazy Harry” because he was, well, crazy! He had the most unique and fun personality. He was all about good times and shenanigans. He was also a most loving boy. He loved to cuddle, anytime, anywhere. He was so incredibly affectionate.

And he used to crack me up every night: When I’d say “Okay, let’s go to bed” he’d literally fly off the couch and haul-ass to the bedroom and leap up onto the bed to be sure he got the “top spot” — the pillow next to my head. Every single night that made me giggle. 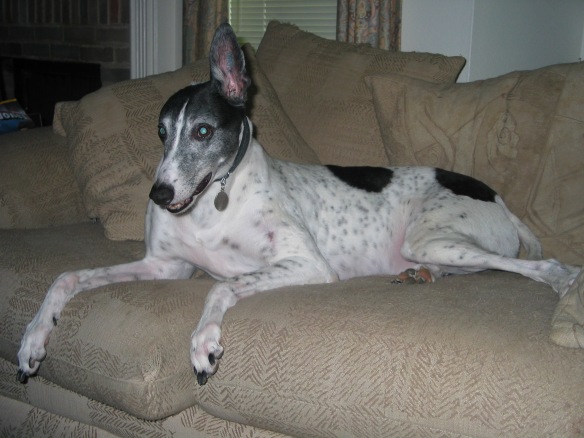 Harry was the fourth dog that I lost but the first one who really taught me that there is nothing to fear about death. Here is the story of his poignant passing:

Three weeks after losing Maggie, my Harry was diagnosed with osteosarcoma, a diagnosis that is almost always a death sentence. Harry was on a pain management program of Fentanyl patches and Tramadol but the bone cancer was just too aggressive. Up to a point the pain patches seemed to manage the pain, but his fourth pain patch gave him no relief whatsoever. He cried out in pain and looked at me with pleading eyes. I told him I understood and not to worry because I wouldn’t let him suffer. 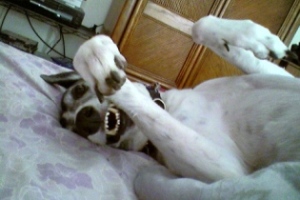 I thought it best to try to explain to him what was going on. How do you explain death to a dog? I laid on the bed with him and we were facing each other. I just started talking. I told him that he had a horrible cancer and I couldn’t make it go away. I told him that soon I’d have to release him, that Dr. Willis would be coming over and afterward he wouldn’t feel any more pain. And that he’d have a new home, even better than the home he had at our house and he’d get to see Maggie, Bella & Takala again. I told him how much I loved him and how I hated that dreadful disease; how very blessed I was that he came into my life and how very empty my heart was going to feel when he was no longer here. And on and on I talked, for what seemed like an hour, and his eyes NEVER left mine. Not once! I knew that he truly understood everything I was saying.

The next day, Harry was again up on my bed. When I came into the room he moved to change position and let out a painful scream. I moved one of the pillows that surrounded him –I had built him a little “fort” out of big fluffy pillows so he wouldn’t roll out of bed…which he so often did in better days!– and sat down next to him. He reached out for me with his front paw and put it on my chest. He looked up at me and I asked him, “Harry, are you ready to go?” He then reached over and kissed my lips with his nose. And I knew. It was time. He knew it too.

So for his breakfast I cooked him a big steak, a baked potato with melted butter and cheddar cheese plus a side of cooked carrots. For dessert he had some of his birthday cake (he had just turned 10 a few days before).

Harry was in his favorite spot, the middle of my bed, and that’s where he would stay until the end. When Dr. Willis called to say she was on her way, I thought about what music channel to put on, what music would Harry like most. I chose the Classic Rock channel because that’s what we always listen to and the dogs are used to it. I flipped over to that channel and Steve Miller’s FLY LIKE AN EAGLE was playing. “How neat is that?!” I thought.  More astonishing is what happened just after the injection. When Harry’s heart stopped beating, Dr. Willis whispered “Look at what song is playing right now.” I looked up at the screen: it was Paul McCartney & Wings’ LET ‘EM IN. Just then the lyrics being sung were:

Someone’s knockin’ at the door,

And at that moment, I knew Harry had arrived safe and sound in his new Heavenly home.

In short, it was his passing that made me realize there is most definitely an afterlife and there is an absolute doorway to Heaven.

I miss my Hare-bear so much. Every day I miss him.

Remembering you today, Harry, and every day. I’ll see you someday soon, my precious. Mama loves you always.

In Loving Memory of Harry, aka Premier Cruiser