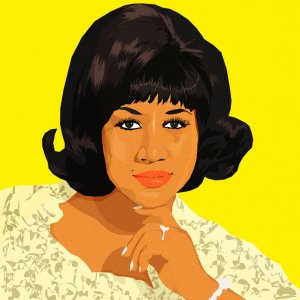 Aretha Franklin, the world’s Queen of Soul, died on Thursday. She was 76.

She has left behind an extraordinary legacy of music that moves, in oh so many ways, and songs that instill confidence and unleash untapped power…but more than that, she left us with anthems of great import, her most widely recognized being RESPECT.

Originally a song by Otis Redding, “Respect” was written and recorded by him in 1965, which interestingly ended up being a significant one for him as well. (It was his second Top 40 hit, following “I’ve Been Loving You Too Long (To Stop Now),” and it helped establish Redding on mainstream radio. Otis performed the song at the Monterey Pop Festival in 1967 and this was a defining performance for the singer, who died in a plane crash six months later).

But Aretha came along and re-imagined the song. With a re-working of the lyrics, a musical rearrangement (via the Muscle Shoals studio musician’s soulful guitar hook, the background vocals and the added sax solo) and a completely different slant on the messaging, “Respect” was suddenly recognized the world over. Aretha’s rendition found greater success than the original, spending two weeks atop the Billboard Pop Singles chart, and eight weeks on the Billboard Black Singles chart. The changes in lyrics and production drove Franklin’s version to become an anthem for the increasingly large Civil Rights and Women’s Rights movements. She altered the lyrics to represent herself, a strong woman demanding respect from her man. Franklin’s demands for “Respect” were “associated either with black freedom struggles or women’s liberation.”

The song also became a hit internationally, reaching #10 in the UK and helping to transform Aretha Franklin from a domestic star into an international one.

FUN FACT: Otis Redding himself was impressed with the performance of the song. At the Monterey Pop Festival in the summer of the cover’s release, he was quoted playfully describing “Respect” as the song “that a girl took away from me, a friend of mine, this girl she just took this song”. “When her hit single ‘Respect’ climbed the charts in July 1967, some fans declared that the summer of 1967 was ‘the summer of ‘Retha, Rap, and Revolt.'”  Adorable!

I am partial to many of Aretha’s songs but “Respect” hits some real nostalgia notes in me. Not only is this amazing song a landmark anthem, it’s a ton of fun!

The song came out at the apex of a social and political climate on the verge of a major shift. “Respect” hit at a time when millions of people were feeling marginalized in an era where inequality and social injustice was the norm. This song became a theme song in the civil rights movement and a feminist anthem that encouraged women to not only recognize their worth but to insist that others acknowledge and respect it. It was then, and is now still, a song of empowerment.

In addition to all that (and so much more), it’s just a damn good song! It was an anthem of sorts for me too, and it was featured prominently on the jukebox of my bar. When I opened my bar, music was a priority in the planning. When I ordered the jukebox, I asked the company rep about the music. I was told that the company uses demographics and research on what songs perform best in terms of frequency of play and that they load the music based on those metrics.  And I said, “Ah, nah, I don’t like that. That’s not going to work. I want to pick and choose the music that’s going to be on my bar’s jukebox.” And so I did.

As you can imagine, that jukebox had some incredibly kickass music on it. And my bar developed a reputation for it even. I always got a charge when new folks would walk in and say “We heard this place has the best jukebox in town!” Oh yeah, proud mama.

Aretha Franklin’s “Respect” was one of the first songs I chose to be on the jukebox. It often was the ‘Last Call’ anthem. At the end of the night, I’d cue up the song and call “Last Call for alcohol!” and, with the speaker control behind the bar, I’d crank that baby up and “Respect” would vibrate and dominate. It would be so loud that it was virtually impossible to hold a conversation for those few minutes; the customers just had to get up and dance. It was a highlight on so many nights and it always amazed me how that song could completely change the mood and the dynamic of the place. Everybody would be singing and dancing and laughing because that song just moves people. It evokes an ultimate feel-good and you just can’t help but smile when it plays. Every time I hear it now, my mind wanders to my old “bar days”. Some great and interesting memories for sure.

I’m not going to do a big write-up on Aretha because the world is inundated with articles and stories and tributes to our Queen of Soul. There are several wonderful pieces online and I’ll share links of some that I particularly enjoyed.

I will leave you with some music though. The following is my Plug and Play Aretha Playlist for your listening pleasure. It kicks off with my top 5 favorite Aretha songs. Enjoy!

“Rest in eternal peace” was the sentiment expressed by Barack Obama in his social media tribute to Aretha. He had a close affinity with her and her music moved him to tears (as evidenced in the video of Aretha’s performance for Carole King in December 2015 when she was receiving the Lifetime Achievement Award at the Kennedy Center Honors). Aretha also performed at President Obama’s 2009 Inauguration.

America has no royalty. But we do have a chance to earn something more enduring. Born in Memphis and raised in Detroit, Aretha Franklin grew up performing gospel songs in her father’s congregation. For more than six decades since, every time she sang, we were all graced with a glimpse of the divine. Through her compositions and unmatched musicianship, Aretha helped define the American experience. In her voice, we could feel our history, all of it and in every shade—our power and our pain, our darkness and our light, our quest for redemption and our hard-won respect. She helped us feel more connected to each other, more hopeful, more human. And sometimes she helped us just forget about everything else and dance. Aretha may have passed on to a better place, but the gift of her music remains to inspire us all. May the Queen of Soul rest in eternal peace. Michelle and I send our prayers and warmest sympathies to her family and all those moved by her song.

I found it interesting to see how the print media is honoring this Soul Dynamo. In particular, I may order a copy of the 8-page commemorative section, “Eternal Respect”, from the Detroit Free Press, Aretha’s hometown paper. The following is taken from Ad Age magazine:

Aretha Franklin, who died on Thursday, “was the loftiest name in the rich history of Detroit music and one of the transcendent cultural figures of the 20th Century,” Brian McCollum writes in the Detroit Free Press. “Raised on an eclectic musical diet of gospel, R&B, classical and jazz, she blossomed out of her father’s Detroit church to become the most distinguished black female artist of all time, breaking boundaries while placing nearly 100 hits on Billboard’s R&B chart—20 of them reaching No. 1.”

The news of Franklin’s passing continues to reverberate across the world today, and many papers, including the Free Press, pay tribute to the soul legend on their front pages this morning. A small sampling:

9 thoughts on “Monday’s Music Moves Me – In Honor of the Queen of Soul: A Tribute to Aretha Franklin”