Yikes. What a day for this Australian fisherman! 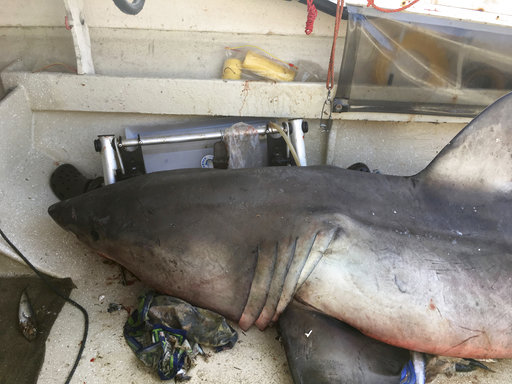 In this Sunday, May 28, 2017 photo released by Lance Fountain, a 2.7-meter (9-foot) great white shark lays on the deck of a fishing boat at Evans Head, Australia. Fisherman Terry Selwood said Monday, May 29, that he was left with a badly bruised and bleeding right arm where the airborne shark struck him with a pectoral fin as it landed on him on the deck. (Lance Fountain via AP)

CANBERRA, Australia (AP) — A 73-year-old Australian fisherman said Monday that he caught a far bigger fish than he hoped for when a 2.7-meter (9-foot) great white shark leapt into his boat, knocking him off his feet.

Terry Selwood was left with a badly bruised and bleeding right arm where the airborne shark struck him with a pectoral fin as it landed on him on the deck of the 15-foot power boat Saturday off Evans Head, 450 miles north of Sydney.

Selwood sprung up on the gunnel at the bow of the boat to avoid the thrashing shark and steadied himself by clinging to the tubular metal frame of the sun shelter, known as a bimini.

“I didn’t give it a chance to look me in the eyes. I wanted to get up and get on top of the gunnel because it was thrashing around madly,” Selwood told Australian Broadcasting Corp.

“Flash Gordon wouldn’t have caught me,” he said, referring to the athletic science fiction comic book hero of the 1930s.

Selwood used a hand-held radio to call the Evans Head coast guard and stayed on the gunnel until a rescue boat arrived.

“He said, ‘I’m injured, I’ve broken my arm, I’ve got lacerations and there’s a shark in my boat,’” Bates said.

“Often a fisherman will bring a small shark on board — maybe 2 or 3 feet (up to 1 meter) — and they’re still ferocious. That’s what I was expecting, but I was totally wrong,” he added.

The coast guard crew rescued Selwood, but left the shark alone. The shark was estimated to weigh 200 pounds.

“The shark was thrashing inside the boat, taking up the entire deck area — there was no way you’d put a foot in there,” Bates said.

The coast guard later towed Selwood’s boat with the shark into Evans Head just before nightfall.

“We think it was already dead at that stage, but no one was game to put their finger in to find out,” Bates said.

Why the shark flung itself over the motor and into the anchored boat is a mystery.

Selwood said he was sitting on a cooler, known generically in Australia by the popular brand name Esky, with two hand lines off the port and starboard sides of the boat when he saw one of the lines move as if a fish was hooked.

“I hopped up off the Esky, I touched the hand line and I just caught a blur coming in the corner of me eye and just out of instinct,” Selwood said. “I threw me right arm up and this thing hit me in the forearm and spun me around and knocked me off me feet.”

“This thing was beside me and I looked over and thought, ‘Oh, a bloody shark.’ So I just climbed — he was doing a mad dance around, he was thrashing everywhere,” he added.

Selwood said he’ll have to replace destroyed equipment, including buckets and coolers, before returning to the fishing spot he’s visited for more than 50 years.

“He didn’t do anything structural to me boat, it just smashed anything that was in his road. You can understand, he was a wild creature out of his comfort zone,” Selwood said.

It’s too bad that they didn’t get that shark back into the water. Sad that he/she died. But how could they have pulled 200 lbs of thrashing Great White off the boat? I don’t know. Could they have??

On another note: Apparently there’s a new movie a la Jaws coming out next month. I haven’t seen it advertised at all but I definitely want to see 47 Meters Down!

How do you feel about sharks? Have you ever been up close and personal with a shark? Are you a fan of the Steven Spielberg movie Jaws? Do you plan to see 47 Meters Down?