Ay-yi-yi. It’s never a dull moment around here and this morning was no exception. I had to take my greyhound Picasso to the vet for his annual exam and vaccinations. He’s always excited to go for rides but apparently this morning he was extra excited.

I had him on leash and was inserting the key into the rear hatch door on my Mitsubishi Montero when he suddenly came flying over my shoulder and went SPLAT right into the rear window! He jumped up and attempted to get in the vehicle before I even had the door open!

It was shocking to say the least. I tried to catch him and only half caught him on his way down but he was able to at least get down on the ground without plummeting.

He must have thought the black glass was the opening because his aim was definitely for the window. He jumped over 5 feet! His head was above my head! He literally flew over my left shoulder and then his whole left side, head included, collided with the window. S-P-L-A-T! He broke my rear windshield wiper, which is okay, I don’t use it that often anyway. 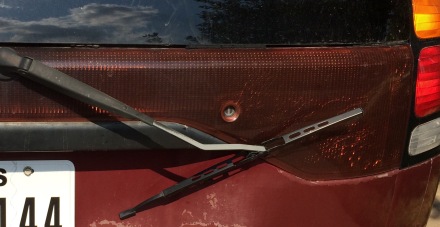 The vet said he seemed to be a little sore on his one side and that he’d probably be feeling some minor pain later on today. I gave him a Tramadol to stave off any ill effects of his collision with the rear window.

What a crazy dog! What was he thinking???

11 thoughts on “My Flying Dog”