DISCLAIMER THAT APPEARS AT THE BEGINNING OF ALL A-Z 2015 PAGES:

Welcome to the A-Z Musical Tour of My Life! I have wanted to put something like this together for a long time now and the A-Z Challenge just seemed like the perfect opportunity. I’ve compiled stories, trivia, research, music videos and live concert footage on all the bands and musical artists who have been important to me over the years, especially during my youthful years in the 60s and 70s. At first glance, the posts may seem long – and some of them are due to the number of videos included – but it’s really laid out in a way that will enable you to scroll through and read, see or hear just what you want and then either move on to the next A-Zer or linger and listen to the great music that you’ll find here. By all means, bookmark my blog so you can come back! In addition to individual songs, there are some full albums here for those who may want to enjoy some music while they’re surfing or working. I hope you find that the stories are entertaining, the information educational and the trivia interesting. It would be a tremendous honor if you would bookmark the A-Z Musical Tour of My Life as a resource for great music and music information! Now, let’s get started with…

I guess I’m essentially cheating on this letter because this is supposed to be a Musical Journey of my Life and I’ve been highlighting and showcasing bands and music artists who have been important to me over the years. But I simply was not aware of any bands beginning with the letter X. So I set out to find some. To my surprise, there are several bands that start with the letter X. I discovered these three that I actually like.

X is for Xavier Rudd – The first up is Xavier Rudd – I am so excited to have found this guy! I LOVE the first song that I’m posting here, Follow the Sun. And it has a fabulous video to go with it. “Xavier Rudd is an Australian singer, songwriter and multi-instrumentalist. He is well known on the music festival circuit for playing at musical festivals and concerts in Australia, North America and throughout Europe. His fan base is particularly strong in Australia and in Canada, where he has recorded several albums and performed live shows.”  (Source: Wikipedia)

Of his music: “Rudd is a one-man band who plays surrounded by instruments in a complicated array. Typically, he has three didgeridoos placed in front of him on a stand, a guitar on his lap, a stompbox by his habitually bare feet, and an assortment of drums, harmonicas & bells near at hand, or near at foot as the case may be. Several of Rudd’s songs incorporate socially conscious themes, such as spirituality, humanity, environmentalism and the rights of Aboriginal peoples. His songs include stories of the mistreatment of the indigenous people of his homeland. Rudd has included both Australian and Canadian Aboriginal vocals in some of his songs. He tends to play the Didgeridoo in many of his songs.” (Source: Wikipedia)  For more about Xavier Rudd, visit his website.

Follow the Sun – from the description on the Xavier Rudd Music channel on YouTube: ‘Follow The Sun’ is the first offering from Xavier Rudd since his 2010 release ‘Koonyum Sun’. The clip was filmed on location at Stradbroke Island, Queensland Australia. And it’s really good! Enjoy.

The Letter – accompanied by a surfing video:

X is for XTC – “a new wave rock band from Swindon, England, led by songwriters Andy Partridge and Colin Moulding [with Terry Chambers and Barry Andrews] and active between 1976 and 2005. The band enjoyed some chart success, including the UK and Canadian hits “Making Plans for Nigel” (1979) and “Senses Working Overtime” (1982).

Despite their three-decade career, XTC were a performing and touring band for only six of those years: they retired from live performance in 1982 … [after a breakdown of Andy Partridge]. In early 1982, while at the peak of their popularity, XTC embarked on a major tour. This was abruptly cut short when Partridge suffered a mental breakdown on stage during one of the first concerts of the tour in Paris on 18 March 1982.

On 2 April 1982, a Friday night, XTC were scheduled to play at the Palladium in Hollywood, California, but did not appear. The audience milled about the open festival floor for a long 45 minutes/hour after opening act Oingo Boingo departed the stage, and then finally it was announced that XTC would not take the stage due to the “illness” of one of the band members (later revealed as Andy Partridge’s ongoing fight with stage fright in Chris Twomey’s book XTC: Chalkhills and Children). The following day, XTC played one last concert at the California Theatre, San Diego, CA then never played another tour date. (XTC would perform several acoustic sets for radio only in 1989.)

Andy Partridge’s breakdown, which manifested itself as uncontrollable stage fright, was reportedly precipitated by his wife throwing away his supply of Valium. According to the band’s biography, Valium was prescribed to him as a teenager, but he was never taken off the drug and became dependent on it. Concerned about her husband’s dependence, Partridge’s wife threw his tablets away — without seeking medical advice — just before the Paris concert. Partridge particularly needed Valium to cope with the grinding monotony of concert touring, which he had always disliked but endured for the good of the band. In addition to “memory loss and limb seizures”, the sudden withdrawal of medication brought on anxiety attacks of such severity that he was soon forced to withdraw from performing permanently. The European and British dates were cancelled and after completing only one show in San Diego the whole US leg was also abandoned. After this XTC became exclusively a studio band (apart from occasional live-to-air performances from radio stations, and a handful of TV appearances).”  Source: Wikipedia 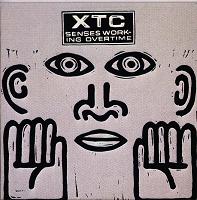 Senses Working Overtime – The first thing that jumped out at me in this video is that the guitarists and bassist are all left-handed players! I found that highly unusual, being a left-hander myself, but after some investigation, apparently they did that just for the sake of the video as other performances show them playing right-handed. They must have chosen to do that in keeping with the “senses working overtime” theme. I wonder how many people noticed. Does that stand out to you?

X is for X the Band – Here’s a band called X! From Wikipedia: “X is an American punk rock band, formed in Los Angeles in 1977. Established among the first wave of American punk, the original members are vocalist Exene Cervenka, vocalist/bassist John Doe, guitarist Billy Zoom, and drummer DJ Bonebrake. The band released seven studio albums from 1980 to 1993. After a period of inactivity during the mid to late 1990s, X reunited in the early 2000s, and currently tours.”

It was interesting to note that X appeared at the 2008 SXSW Festival. If you’re not familiar, SXSW (South by Southwest) is a huge music festival here in Austin Texas that happens every March. It started in 1987 and now includes a film and interactive sets of the festival. “SXSW Music is the largest music festival of its kind in the world, with more than 2,200 official performers and bands playing in more than 100 venues. The music event has grown from 700 registrants in 1987 to nearly 12,000 registrants. SXSW Film and SXSW Interactive events have grown every year, most recently bringing around 15,000 to 20,000 registrants to Austin every March.”

Footage of the X performance at SXSW is viewable on Crackle.

Burning House of Love – this is the first song I heard of X and it’s quite good!

True Love – from their 1983 album More Fun in the New World:

So, that’s it for my X bands. Like I said, they weren’t any that I was familiar with before now but I’m happy to have come across them. Do you have a favorite X band?