GREY2K USA Worldwide, the largest greyhound protection organization in the United States is a non-profit agency that works tirelessly to end the cruelty of dog racing and pass stronger greyhound protection laws, just came out with a startling report:       74 greyhounds died in Florida racetracks in the last 7 months of 2013. In more disturbing terms, a greyhound dies EVERY THREE DAYS in Florida racetracks. That’s just in ONE state! 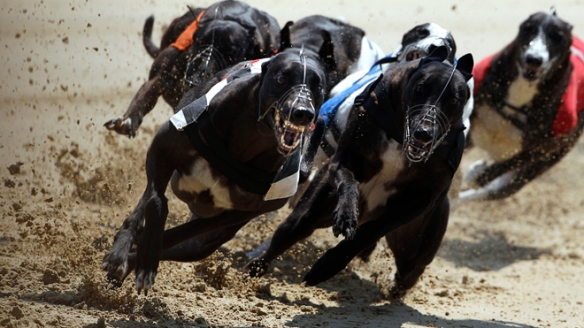 A new law that was enacted in Florida and went into effect in Spring of 2013 requires racetracks to report all greyhound deaths. It’s the first time in the state’s 80+ year history of racing that these numbers have been revealed publicly. But it doesn’t require reporting of injuries. In states that require both death AND injury reporting, guess what has happened since those laws went into effect? THE NUMBER OF GREYHOUNDS KILLED OR EUTHANIZED DECREASED SIGNIFICANTLY. According to Grey2K’s Executive Director Cary Theil, “In Massachusetts, the number of greyhounds that were killed dropped by 43 percent in the first year after passage of an injury reporting law.”

Forty-three percent! Why the decrease in the number of deaths and euthanasias? Because now they can’t cover up the number of greyhounds they dispose of who could’ve been saved and they can’t sweep the deaths under the kennel floors anymore…or at least it makes it harder to do so.

Florida’s greyhound racing lobby is fighting the requirement to report injuries. According to an FoxNews.com article, The Florida Greyhound Association, an industry lobby, reportedly opposes extending the new law to the mandatory reporting of dog injuries, and instead favors state-mandated infrastructure improvements at dog-racing tracks that they say would ultimately improve safety for the animals.  (insert my commentary: Of course the industry lobby opposes the new law requiring mandatory reporting of dog injuries! It’s so much easier to get away with killing injured greyhounds when you don’t have to report it! The lobby’s ridiculous alternative is “state-mandated infrastructure improvements at dog-racing tracks”. Yeah, right. Like that would really happen. We all know that’s a crock of PR bullshit).

A recent (2/16/14) indepth Miami Herald article goes into detail about the reported greyhound deaths, recent legislation, the effects of the new law, the industry lobby and it’s financial influence on lawmakers. It’s an eye-opening read. Some excerpts follow:

“The death of a greyhound … would have normally gone unreported in Florida. But track operators are now required to notify the state within 18 hours of a greyhound’s death at a track or racing kennel in Florida. Approved by lawmakers in 2010, the rules didn’t take effect until last spring — more than 80 years after dog racing became legal in Florida — a testament to the greyhound racing industry’s power and influence in Tallahassee.

According to death reports reviewed by the Herald/Times, 74 dogs died on race track property between May 31 and December 31, 2013 — one every three days.

Unlike other states, Florida’s greyhound industry does not have to report injuries. And, although some death reports provide detailed information, many do not. Among the deaths:

WS Mellow Yellow, a 2-year-old, died July 15 “while being hauled from Alabama” to the Sanford Orlando Kennel Club. (insert my commentary: probably due to being hauled in an unventilated and un-air-conditioned truck in the heat of the summer when temperatures inside the vehicle can soar to 120 degrees and higher)

GM’s Tiny Momma fractured his left front leg during the 14th matinee race at the Daytona Beach Kennel Club on Oct. 26. “The injury was of a nature that required the track veterinarian Dr. Kevin Eastman to euthanize the greyhound after his post-race examination,” the report said. (insert my commentary: a fracture usually doesn’t require euthanasia; my guess, and this is just my opinion, is that it was simply going to be too costly to treat the injury plus being that the dog wouldn’t race again and therefore couldn’t bring in wager money, he was considered “disposable”)

Year-old TD’s Harley died July 16 after he collided with the fence on the first turn and finished last at St. Petersburg’s Derby Lane.

At the Washington County Kennel Club, a 2-year-old male named Flying Meteorite was “cooled down” after a race on June 8 but was still panting heavily. Inspectors concluded: “He died when he was put back in his kennel.” (insert my commentary: how thoroughly did they really try to cool this dog down? Overheated dogs need to be cooled slowly and carefully; their temperature needs to gradually come down and it requires a significant amount of time and attention)

Other death reports raise questions about the care and treatment of the animals.

A dog named Hallo Spice Key died Sept. 3 after being sprinted — running before a race — at 5:45 a.m. at the Jacksonville compound by a helper for the James “Barney” O’Donnell kennel. “It appears the death could have been prevented had the greyhound not been sprinted in the dark,” the report said. (insert my commentary: gee, ya think? Arrgh!)

A day later at the Pensacola Greyhound track, Tempo Man Eater, a 1-year-old female, died sometime in the middle of the day after being taken out of her crate for exercise. She had not been eating for four days, the report said, so the trainers had tried to force-feed her. (insert my commentary: If a dog doesn’t eat for FOUR days, that usually signifies a problem requiring veterinarian intervention. THEY FORCE-FED HER!! And you have to know that they likely were not gentle about it)

And on Dec. 5, a puppy who hadn’t been named yet arrived at the St. Petersburg Kennel Club in bad shape. “We lost a new pup today. He just came off the hauler on Thursday,” the track reported. “Trainer said Dr. Gregory was going to do a necropsy, but the Dr. thought it was head trauma.” ” (insert my commentary: a greyhound puppy dying from head trauma sustained on a haul? How much you wanna bet that the hauler used some kind of deadly force to contain or restrain the energetic puppy?)

Sad, sad, sad. What is equally sickening are these facts, also asserted in the Miami Herald article. Those who know me and my disdain for politics know how outraged I am by this:

“Since 1990, the total money waged for the 13 facilities that ran greyhound racing in Florida has fallen by 67 percent — from $933.8 million to $265.4 million in 2012, according to the Spectrum Gaming Group, a New Jersey-based research firm hired by lawmakers to assess the economic effects and social costs of expanded gambling in Florida. As attendance dropped, profits have also plummeted. The industry lost $35 million in 2012 on dog racing, Spectrum said.

Ann Church, vice president for state affairs for the ASPCA, which is working to end greyhound racing in the United States, said the industry’s declining profits are taking their toll on the dogs.

“We realize the economics are such that, in order to make a profit, you have to get rid of anything that is humane — housing, vet care and food,” she said.

When the movement began 20 years ago, animal rights activists didn’t call for an end to dog racing, just a change in the practices, Church said. Today, she said, trainers and handlers are not well paid and conditions are so inhumane that animals suffer. “

And the greyhounds are paying the price because politicians and lawmakers are being influenced (read: paid handsomely) to block legislation that would improve the conditions and safety of the dogs.

Says the Miami Herald article:
“Grey2K’s Theil says the greyhound association’s opposition to more detailed reporting about dog injuries is a signal that they have something to hide.“They do not want the public to have information about the way their industry operates because at some level, they understand if the public has information there will be a lot of public opposition to them,” he said. “The industry is very powerful.” Since 1996, kennel operators and greyhound tracks have given more than $1 million to individual candidates running for statewide office or the Legislature, according to a Herald/Times analysis. But the industry’s real investment was in donations to the Republican and Democratic parties and political committees. Nearly $9 million was spent on campaign contributions in the last 18 years — with close to half of the money spent by South Florida dog tracks to win voter approval in 2004 for slot machines at horse tracks, dog tracks and jai-alai frontons in South Florida.But since voters approved the 2004 referendum, track owners have spent more than $4 million trying to influence legislators.” Read the full article here.
PLEASE TAKE TWO MINUTES AND WATCH
Grey2K’s video, “The Final Lap”
— and then please support all efforts to end dog racing in Florida
and EVERYWHERE!

3 thoughts on “The Plight of Florida Greyhounds – a new report”